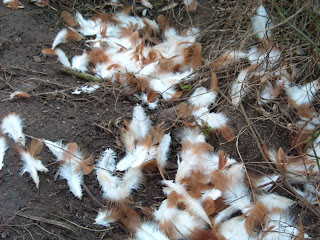 They say bad things come in threes. Well that has definitely been the case for us. For today when I went to feed the chickens I was struck with the shocking sight of two more dead chickens, headless and feathers everywhere. In a kind of surreal panic I then realised one was missing and went looking... not in run, not in coop. Then just when I jumped to the conclusion she had been carted away, Ginger came running up to me from the back of the garden. She had obviously managed to escape what I assume to be a fox and had probably found refuge in a tree.

We live in suburbia surrounded by other houses, I thought it quite unlikely that we would ever get a fox, thus closing them in at night I never thought necessary. Sadly I now realise that was a mistake, and one I deeply regret. Learning to become a gardener has been a series of lessons but none as emotional as this one.

For me the biggest loss was Henny Penny, she was the odd one out, the outsider, the bottom of the pack. When we first collect the girls from the fodder store I attempted to assist the store owner in catching them. While the store owner managed to catch three, I only managed one, and as it turned out the eldest and slowest. Later to be named Henny Penny. 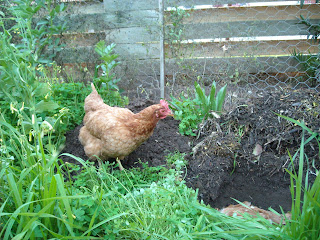 Even though sad for everyone in the family, the one I feel most sad for is Ginger. After having chickens I have learnt how close and important their little community is to them. Today I had the opportunity to witness how even more true that is when I watched Ginger slowly approach her dead friends and started calling out to them very softly. She stayed with me while I dug a hole for them each under a compost pile, and after laying them to rest she just stood there looking down at them for sometime. I would imagine it is a very lonely in the coop tonight.

Without question we are going to get three more. What would be the best method to introduce them to Ginger be? Melanie suggested just getting one to start with and allow them to bond before bringing in another two. Any suggestions?
Posted by Jason Dingley at 9:19 PM