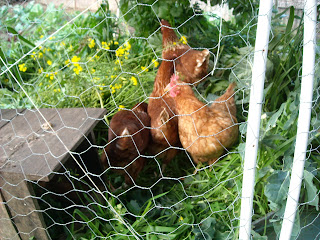 It was a busy weekend in the garden, but I will break it over a few posts. First let me introduce you to three new chickens. Based on the way Ginger was acting, solitude does not seem to be a form of relaxation for a chicken, so all of us in the family felt it necessary to get her some more friends quickly. Three new ISA Browns were purchased from our local fodder store, same place we got the first four. Even the buying of chickens is a fun and entertaining experience. No other store purchase I know of requires the storekeeper to chase after and catch the items for sale.

Despite it being a few weeks earlier than I wanted, I thought it best for the new chickens to be introduced via the chook tractor. A couple of reasons... 1. Chickens love being in the tractor, especially on a fresh bed ladened with vegetable leftovers. 2. The tractor is a completely enclosed dome. When I first got the previous set they escaped often in the first few days. Amazing how high a chicken can fly when it really wants to.

The introduction to Ginger was very interesting to watch. Naturally I put her in the tractor first, let her settle in, then added the three strangers. She instantly went stiff as post, I don’t think she even blinked, as the others walked in past her. It was probably a good half a minute before she moved, slowly at first, then all of a sudden a small timid Ginger buffed out her feathers, stretched her neck high, and showed a side to her that we had never seen before. I went and grabbed a cup of tea then we all sat and watched the fight. All bets were on Ginger. There was no real competition really, the newbies didn’t even challenger her once, they just ran. So currently it looks like Ginger is the head chook. 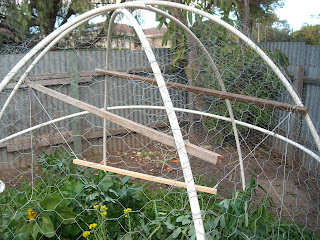 To insure their safety from another fox attack I decided to raise the roosting perch from about 1 meter to 1.5 meters off the ground. I can’t imagine a fox being able to jump that high. If I am wrong, like I was with foxes not living in the suburbs, please let me know.

To help the chickens reach that height I copied an idea from Celia, a lower perch held by string. The idea being that a chicken can use it but a fox will undoubtedly lose balance. The really funny part of this story is that I forgot how Celia and her husband had done this. So initially I built a free moving swing. At dusk I watched through the dinning room window to see how they were getting on. What I witnessed was hilarious. Ginger jumped onto the perch, it start to swing, and with her attempts to keep balanced she made it go higher and higher until she was so high it was hitting the sides of the dome. Eventually she fell or knowingly jumped off. I only wish I had the camera so you could all have seen it too. I quickly fixed the design fault by using four strings, instead of two. 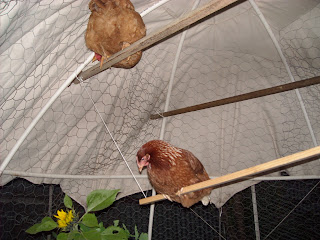 Once Ginger was up happily roosting she however did not let the others up. Every attempt they made was met with a swift peck to the top of the head. 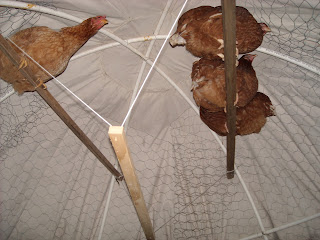 Being the big rooster that I am, I had to intervene. I hopped in the dome with them and placed each of them on the opposite perch to Ginger. I said “good night and no fighting” and all was quiet in the dome. The same thing happened last night too. Hopefully I don’t have to do this for too many nights. At least they don’t require a bedtime story and help with brushing teeth.
Posted by Jason Dingley at 8:29 PM