Who’s been eating my seedlings? 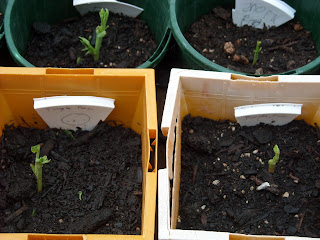 Who’s been eating my seedlings? Just look at those peas... chomped down to the stork. 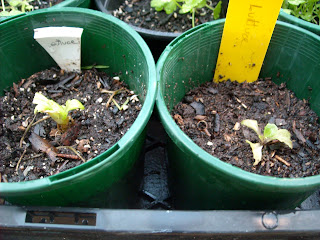 And these lettuces... chewed down to nothing more than a stump.

Well the Goldilocks of this story, would you believe, are those little cute sparrows. This has been happening quite a lot and has had Melanie and I stumped for some time. Bugs often tend to hang around the vicinity, but we could never find any, nor any evidence of them being there such as silvery trails. Besides we often saw sparrows perched on the sides of the pots pecking away at the insects. NOT! It took Melanie’s keen eye to notice that the little buggers were not eating insects at all, rather they were ripping shreds out of the seedlings. 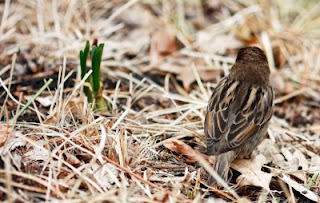 Photo by Maggie Smith. I tried taking a photo myself but without a telescopic lens they didn't turnout to good. But I think this photo illustrates my point well. Look at the sidewards glance it's giving that seedling.

According to Wikipedia sparrows are primarily seed eaters, but varieties like the House Sparrow that have adapted to life in the big smoke, like pigeons and seagulls, have developed an appetite for just about anything. So be aware your seedlings are on the menu.

As a result a seedling cover is in the making. Stay tuned...
Posted by Jason Dingley at 9:00 AM