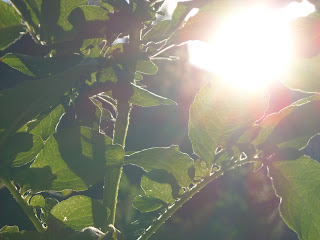 Well it sure has been hot here in Adelaide over the last few days. So while yesterdays BBQ was cooking itself I enjoyed the cool of the shade. Sitting there admiring the garden I started to thinking about what it must be like for those poor plants unable to uproot and join me for a cold beer under the pergola.

With the previous incarnation of this garden (rectangle garden boxes) during summer I erected A-frames made out of bamboo over the beds and covered with bamboo blinds or shade cloth. They were very effective but also a lot of effort to erect and dismantle. Since then I have seen a few good designs using flexible pipe that would indeed be better. With the new garden however I am hoping, fingers and toes crossed, that I can help the garden survive in an even simpler way. 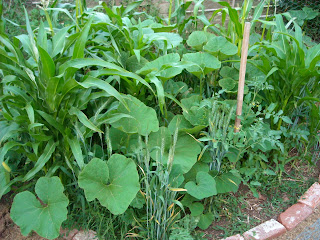 Trying to think like a permaculturalist I asked my self the question “how does nature create shade?” The answer, it grows it! So when planting out the pumpkin seedlings to establish the pumpkin patch I also got the children to scatter some corn seeds. Hoping the tall corn would provide a perfect canopy. Previous experiences tell me pumpkins can be annihilated by constant direct exposure to sun, while corn seems to just shrug its shoulders at the heat. Before planting in the corn I did check my companion planting guide to insure there wouldn’t be any bickering between the two. 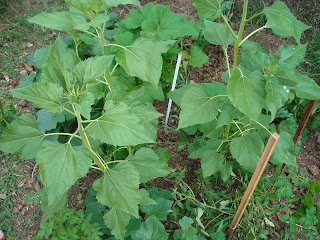 In this bed we have used sunflowers to try and provide a little shade to the cucumbers and other various things growing beneath. We have never grown sunflowers before so it is a pure assumption that they like the heat. But with a name like sunflower I will be very disappointed and upset with the person who gave them their name, if they don’t. I do wish we had planted more though. Hopefully the ones just propagated last night will make it in time to be of some use.

Whether either the corn or sunflowers provide enough shade only time will tell, but so far so good. 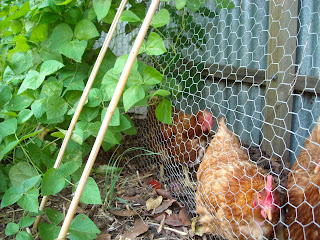 Here are our girls taking refuge behind the wall of Scarlett runner beans. This was completely unintentional, but I didn’t tell them that.

How does your garden survive summer?