Putting the chicken tractor into a lower gear 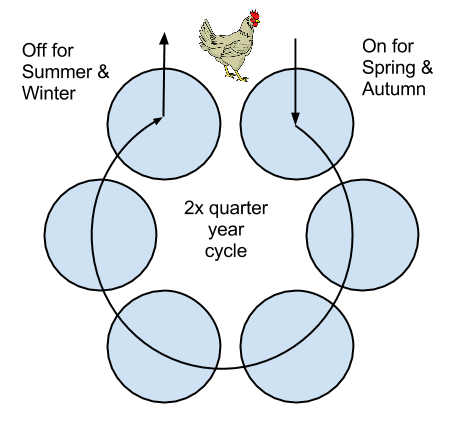 As guided by Linda Woodrow in her book 'Permaculture Home Garden' the chicken tractor has been rotating around the garden in a 3 monthly cycle, twice a year - once in Autumn and once in Spring. On each rotation they spend 2 weeks on each of the 6 beds. For the other two 3 monthly periods the girls spend their time in the outer chook run patrolling the perimeter of the garden. Linda advises moving the chickens to a second mandala garden during this off-period, if you have got one. 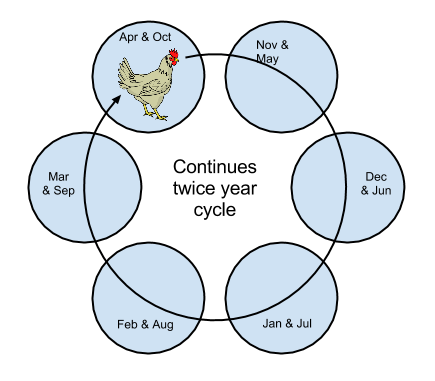 Sometime ago my mother and I were enjoying a nice chat in the garden when she indicated her desire for a similar garden. She continued to say however that she would use a different rotating tractor cycle. Her idea was to continuously rotate the tractor with no off-periods and as a result  the chickens would spend one month on each bed instead of just 2 weeks. I instantly said without even giving it a thought that that wouldn't work - as children often do to prove their superiority over their parents. I must remember I am an adult now. Anyway… I have had considerable time to rationally think through mum's idea, unbiased by my ego, and I think it is a good one, well worth a try.

My thoughts behind why I think it is a good idea is as follows… The current 3-month-on 3-month-off cycle has proven to have a few issues in my situation:

As I don't have a second mandala for the chicken tractor to go and work, the girls spend the two 3 month off-periods in a chook run that spans the perimeter of the garden. And it is this very outer enclosure that when compared to the tractor has a number of downsides common to most fixed enclosures.

The outer run does have a couple of benefits. The girls do get a very large area to stretch their legs. But that said the tractor is dome shaped - they can run around in circles, as they often do when chasing other birds that try and get their seed. The other benefit is that they have successfully kept the garden perimeter mostly free from grass. Which I will miss.

My mum’s idea of keeping the chickens in the tractor full time however, will remove the need for the outer chicken run and house entirely and free me of the above mentioned problems. But the biggest motivator for putting the tractor into a lower gear is all about creating a consistent rhythm for the gardeners (us). I have found 3 months on, then 3 months off, means my routines change every three months. And even the types of tasks that I am performing are quite different between the two phases. I am a big believer in consistent and frequent routines are a key to success - ask any athlete. I also believe the 3-month-on 3-month-off method has partly contributed to the dips in the gardens productivity. So I am looking forward to what will hopefully be some positive results in both efficiency and productivity.

My only concern is how the girls will keep cool in summer. Currently they spend summer in the outer run and can seek shade from a number of trees. The tractor will be in full sun for a good part of the day, and even though it has a fabric cover I am sure it is not as effective shade as a tree. I have spent considerable time working out the best starting point for the tractors rotation to ensure the tractor will be located on the most shadiest beds during the 2 hottests month of summer - January and February.  I would love to hear of any other ideas to keep them cool.

If this idea does workout all credit goes to you mum - the humble brains in the family. And if it doesn't workout I have got someone to blame ;-)
Posted by Jason Dingley at 8:39 PM

Email ThisBlogThis!Share to TwitterShare to FacebookShare to Pinterest
Labels: process