It gives me great pleasure to announce the release of the mini greenhouse version 1.2. Our technical team has been working hard since the first release, and all the glitches experienced with version 1.0 have now been resolved. 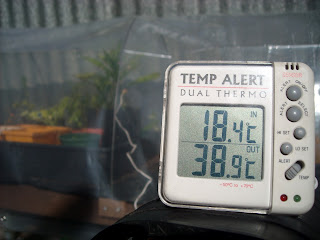 I was pleasantly surprised today when I stuck the thermometer inside the mini greenhouse to discover it had a temperature of 38 degrees Celsius, 20 degrees hotter than the outside temperature. Granted 18 is quite a mild winters day, but it does look like the mini greenhouse is doing what it is meant to, turning winter in to summer. So what is new in version 1.2? you ask. 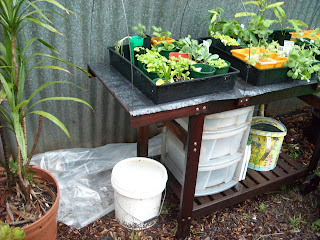 You may remember this photo, with the cover crumpled on the ground after being blown off from the wind. Yolli from Fairy Castle Farm made the suggestion that I could have another set of fasteners that could be used when the weather was looking like it may become a bit wild. So thanks to Yolli's comment that is exactly what I did. 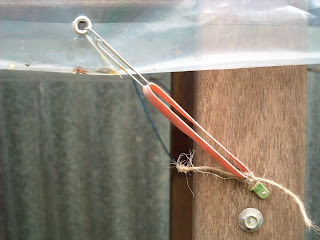 Again utilising a pair of rubber band and paper clip the front is now pulled taught. What was going to be something only used occasionally when the weather got bad, turned out to be so easy to unclip for daily watering that it has became a permanent fastener. 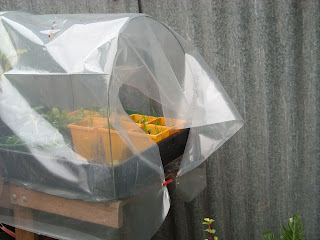 As usual when I went to the hardware store to buy the plastic I ASSUMED I would know what size I needed without measuring. So as you can see the plastic was not long enough to fully come down over the sides. I was hoping that the sides being open wouldn't matter, but it did. A greenhouse works by warming the air inside, so with even just a slight breeze the hot air is extracted away. 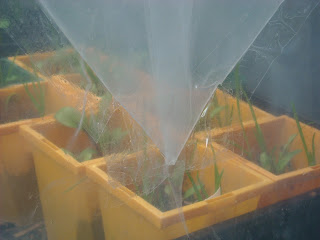 My plan was to go and purchase a complete new piece of plastic, measured to size this time of course, except the day was running behind and a trip to the hardware store was only going to result in more delay and frustration. So with little time and only limited resources on hand I was forced to improvise, in true MacGyver style, using nothing more than common house hold sticky tape. And it worked a charm. 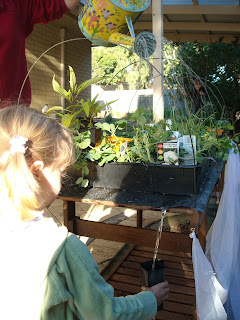 Prior to making the clear plastic cover I also added a black plastic liner to prevent the items stored on the bottom shelf from getting wet. As you can see the testing team are hard at work insuring my work meets quality standards. 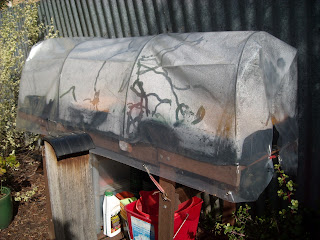 I do hope the seedlings we are about to start raising like it humid. Hay are those snail trails?
Posted by Jason Dingley at 12:27 PM