Mowing the lawn is child's play 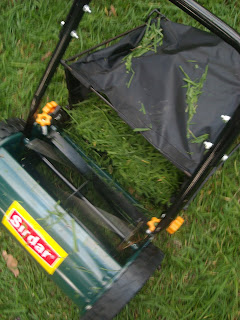 Saturday was a beautiful sunny one, a perfect day for working in the vegetable garden, but alas the rest of the garden was requiring some long over due attention. Due to a broken down lawn mower we were starting to bring the neighbourhood down with our over grown front lawn (which will one day go). Now I don’t know about you but I had grown tired of motorised lawnmowers. When you go to use them there is never enough fuel. Then they take an undesirable amount of effort to get them started, and some days they just don’t start at all. Then there is the inhalation of petrol fumes and smoke making me feel like my life just got shorter. I had even tried an electric mower but the motor burnt out, and then there was the cable that my daughter cut in half.

For many years I have thought about getting an old fashioned push powered one but have been reluctant. There must be a good reason you don’t see them about any more, right?

So there I was at the hardware store to buy another motorised mower when I saw a push one. I was immediately attracted to it with its price of $70 compared with the $300+ for the others. I spent a good 10 minutes going back and forth thinking “but will it work, and is it going to be too strenuous to use?” But like a sky diver I took the leap and reveled in the thrill of the risk.

“So did it work?” you ask. Yes it did. You occasionally get a sticky upy bit that escapes the blade and you have to go back over it. But other than that I would say it did a job 99% as good as its petrol powered counterpart. 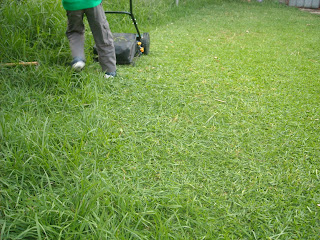 And was it strenuous to use? For the most part not at all. Being so light it only requires a comparable amount of effort as pushing a heavy motorised one. Of course if the grass is well over grown it does take some work, but for regular maintenance I see it being a breeze. Hay, my 6 year old son can do it (see above). Now this I am very pleased about. I would have never let him mow the lawns with a motorised one. Even though I would strongly recommend supervision as it still could cause a good cut but I can’t see it being able to take off a toe, it can’t even cut through small twigs.

My only complaint is it has a very small catcher, so there are a lot more trips to the compost.

So now I have a cost effective, compact, reliable, easy to start, environmentally friendly, child powered law trimming device. How does yours compare?

BTW It doesn’t require the blade to be sharpened as I thought it would, apparently self sharpening.
Posted by Jason Dingley at 9:09 PM