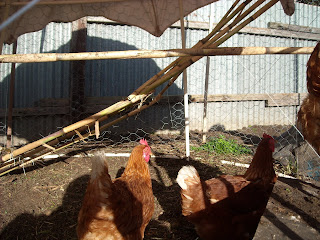 I am not having a very good run with my chickens at the moment. The other day when opening the dinning room curtains I was struck with the sight of a broken perch. Now either it was the chickens mucking around jumping up and down on it, or it was poor workmanship. I suspect the latter. Poor things, I felt very sorry for them and hoped it hadn't broken too early in the night. If it had it would have been a cold night spent on the ground, or a crammed one inside the nesting box. I guess I will need to select stronger bits of bamboo. And here I was thinking the dome was complete. 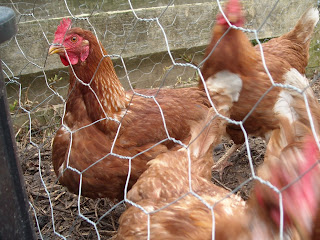 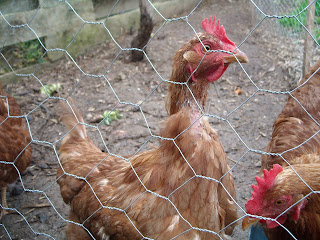 And now look what’s happened to Speckles. She has lost all her feathers from around her neck. It is quite a disturbing sight. Goes to show looks have nothing to do with being the head chicken as she still demands to be fed first. A quick google reveals this could be caused by skin parasites, pecking from other birds, too hot, or normal moulting. I am open to any thoughts? 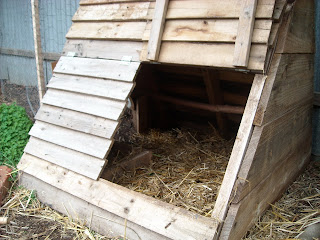 Also they have not been laying many eggs, down to one per day. I am questioning whether putting them into the dome in winter was a good idea. As a result the girls have been moved back to their cosy wooden chalet. They have been there just a few days now and egg output has already increased. But now who's going to power the tractor?

Strike that. Thanks to a comment left by Green Dean I did a bit of research. It turns out I made an assumption. As the saying goes "Don't assume because it makes an ASS out of U and ME". My assumption was that chickens laid less eggs in winter because it was cold. However it is looking like this is not the case. I found one reference that said this:

"It is not the cold of winter that causes hens to lay fewer eggs, it is the decreased daylight hours. Even if you used a heater and kept the coop at 26 C (79 F) you still would not get as many eggs as you would during the longer days of summer. If you wanted to keep egg production levels closer to that of summer, you could use artificial light to extend daylight the hours."

Source
That's it back in the tractor you go.
Posted by Jason Dingley at 9:54 PM