Where did my Calcium go? 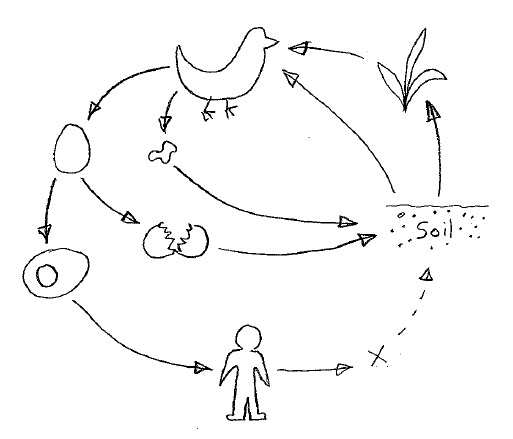 Despite the garden being reasonably successful over recent months, I have been noticing and feeling the overall health of the garden to be declining. Many plants seem to be growing slower and performing poorly, with a greater increase in disease and pests. Last year I was drowning in zucchini and silverbeet, this year barely enough. Corn performed poorly despite being planted on compost sites, beetroot are all quite small, broccoli look terribly sick, and peas are wilting away before they have reached maturity. However the topsoil still looks and feels beautiful.

In April I blogged about how I was having an infestation of mallow weed, and how I questioned what this was telling me. From a bit of research, and some great reader comments, I started to believe the problem was related to a calcium deficiency. To help confirm this I decided to do a pH test.

The children helped me perform a pH test using a chemical based kit with a colour chart. According to my son it was 5.5, according to my daughter 5. Considering males are not as good at colour identification as females due to having less eye cone cells, I thought it best to trust my daughter. Regardless both 5 and 5.5 are considered quite acidic, with 6.5 considered best for most vegetables.

Soil pH is a measurement between how much hydrogen the soil contains compared to the amount of other nutrients such as calcium, magnesium, sodium, etc. When one or many of the nutrients are out of balance the pH level shifts from neutral and becomes either acidic or alkaline. The really important thing to understand here is that a pH test does not tell you which one of these nutrients your soil is deficient in. It is only an indicator to a possible imbalance. And this is where you have to be really careful. Adding dolomite because of assuming you have magnesium deficiency, when in fact you only have a calcium issue, may result in raising magnesium to a toxic level. But it gets even more complex...

From what I have been reading, calcium is in competition with other nutrients such as sodium, potassium, magnesium, ammonium, iron, and aluminum for uptake by the plants. Meaning what appears to be a calcium deficiency may in fact be one of the others blocking calcium uptake. For example a high level of sodium can displace the calcium and cause calcium leaching. Iron and aluminum can combine with the calcium and form insoluble compounds. And that’s just a couple of examples of the complexity.

So with all this complexity how was I going to know if I had calcium deficiency?

Well… in one of those lightbulb moments the answer dawned on me. I was collecting the chicken eggs, as I do, when I noticed that both eggs were cracked, and it was at this moment the lightbulb went on. You see... for a number of months now I have been aware that the eggshells have been becoming weaker and weaker, sometimes even breaking under the light pressure of being picked up. And of course why would the eggshells be weak? You got it… lack of calcium. This also helped to explain a major drop in production.

One very important thing about keeping chickens that I had failed to understand, was that chickens need a heavy source of calcium in their diet, such as shell grit. I felt like a bit of an idiot - it now sounds so obvious that constant egg production would require considerable calcium. I do hope the recent death of Panda was not also caused by this.

After pondering all this, I have come up with the following theory (refer to above picture):

The plants consume calcium from the soil. The chickens then eat the plants, and calcium direct from the soil. The calcium is then used to make eggs. The eggs are cracked open and the shells returned to soil - making a perfect loop. However the inside of an egg also contains considerable calcium - enough to create the whole skeletal system, claws and beak of a baby chick. This part of the egg is eaten by me and other members of my family, and thus never ends up cycling back into the garden. Considering chickens have been working this garden without shell grit for over three years, and have probably laid around 1000 eggs, I feel my theory sounds quite plausible.

Following Linda Woodrow's advice, my long term strategy is to do what I should have been doing in the first place and feed the chickens shell grit. In the short term to quickly get the garden back to performing, she recommended I apply agricultural lime. Which I have now done. I am now looking forward to some happier plants, and I am sure so much happier chickens.
Posted by Jason Dingley at 9:37 PM