“Jason I love your set up. Do you think you could do a post where you take pics of your garden again, especially your chicken run and the house? I'm looking for ideas for my own place the girls roaming free is starting to get a bit wearisome! Thank you.” - Mrs Bok - The Bok Flock 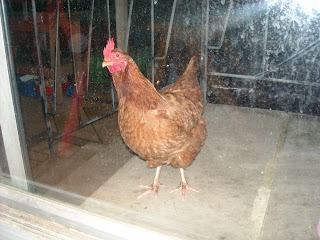 I know what you mean Mrs Bok when you say you are getting wearisome. The idea of having them roaming free is very romantic. However all romance quickly died for us when they just stood on the back step wanting to come in the house as if they were a cat or dog. The difference being cats and dogs don’t shit where they stand. I still don’t know why they were so keen to come indoors. 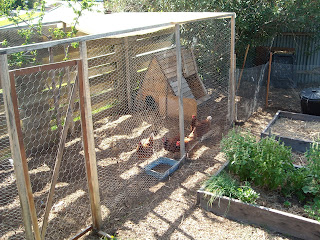 Our first enclosure was a rectangular fenced area, that I think was 2 x 4 meters (8 square meters) in size. I however felt quite mean keeping them trapped in such a small space. When I first put them in there the grass was long and they seemed to be quite happy and content pecking around, but what I learnt was that chickens will soon strip a small area bare in no time. Once there was nothing to peck and scratch their behaviour seemed a little neurotic and  the number of escape attempts increased. I also read that the small area would become a breeding ground for parasites and other nasties. 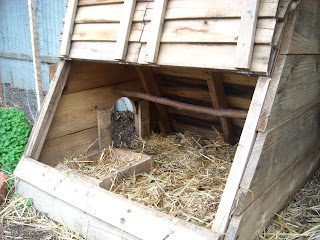 The hen house I made from old wooden pallets. It was fairly simple to make by leaning two pallets together and filling all the gaps with boards from others. The girls do use it, but I question whether they like being perched so close to the ground, and I would be reluctant to have more than 4 in it. So even though it looks cute, I don’t know if I recommend it. 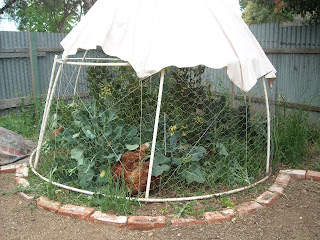 Thanks to Linda Woodrow we were inspired to use a chook dome that despite being smaller in size is actually larger in area as it can be moved around the garden giving the chickens access to new and fresh ground. I have found the chook dome to have many advantages over the other enclosure. The biggest being that you get to use your egg layers as gardeners. Nothing beats their ability to prepare an area for planting. 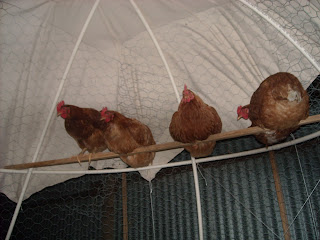 The second biggest benefit of the chook tractor in my opinion is that you don’t need to do that dirty job of cleaning out the hen house. Their poo drops straight to the ground and as part of their daily scratching around it gets worked into the soil, fertilising it. If I had a second mandala garden I would have nothing but the dome and move the chickens onto the second set of beds for 6 months out of the 12. As we don’t have enough space for two mandalas we needed somewhere else to keep them during the off months. 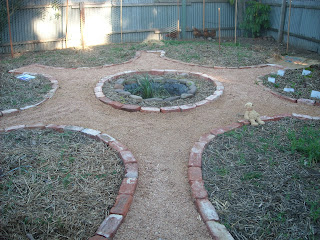 What we did, was to utilise the area around the perimeter of the garden creating a thin but very long chicken run. Hopefully you make out the chickens and the fence in the background of the above photo.

What is amazing about this design is it's like Doctor Who’s tardis. From the outside it appears to not take up very much room at all, but from the inside it is surprising roomy. In length it's about 25 meters and averages 1 meter in width, that’s 25 square meters compared to 8 square meters of our first enclosure. But let me ask you... which looks to take up the most space in the garden?

This illusion of space is well known in the interior design domain. Look at the three equal sized rooms above. Which one has the most furniture in it (blue area)? The answer is at the end of this post.

Being long and thin the girls seem to really enjoy, they actually get to experience running. 25 meters is quite a distance for those little legs, and I love watching them do it at feeding time. The race is on to see who can get their first. Alas poor Gerty is always last. 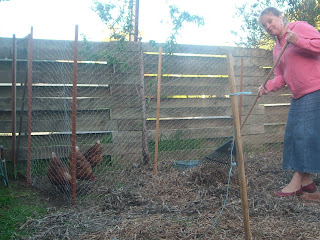 What I love most though, is that you can barely notice the enclosure and it feels like the chickens are roaming freely. Whenever Melanie and I work in the garden the girls follow us around and are ever only a few meters from us.  While I am working I talk to them and throw them any weeds or bugs I find. It is just like they were ranging freely, just without the hassles. 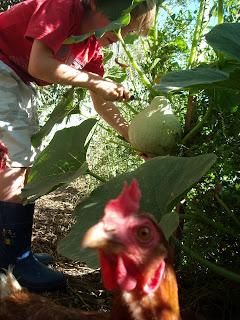 The fence can be even more concealed and integrated into the garden by growing climbing plants over it. This also hides the ugly galvanised fence behind. 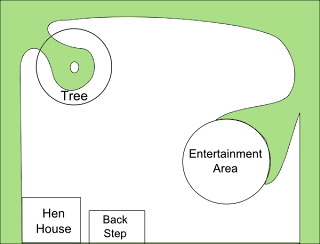 One possible example (not mine)

Once you let go of the old fashioned rectangular chicken enclosure way of thinking your mind is open to be creative. There is no need to stop at just having it running around the garden perimeter like ours. You could have it running in any array of different designs. Let your mind be free from constraint, and so will your chickens.

I hope that helps Mrs Bok.