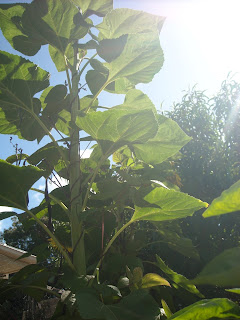 Last summer I posted about a trial technique for shading the garden. With its amazing success I thought a follow up report was in order.

When I first started vegetable gardening summer was a killer, literally. I remember how proud and excited I was one summer with a pumpkin vine that was growing amazingly well with half a dozen little pumpkins forming. Then along came a couple of hot 40 degree celsius days that burnt it to a crisp. I was then forced to watch those little baby pumpkins shrivel away back into the ground. Oh the torture! Since that day I have erected a number of different shade structures. They all worked however as they can not be left intact all year round, I found them to be just another task that I would prefer avoid. They also inhibited access in some places to the garden, but mostly they just looked damn ugly! 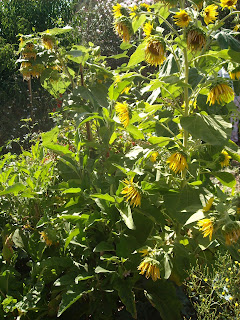 So last summer I experimented with using corn and sunflowers to cast natural shade. Well the results were amazing. Both the corn and sunflowers cast just enough shade to protect what grew beneath, while still allowing enough light for them to thrive. And neither plant seeded to have any ill effects on the plants beneath. As a result I did the same this summer, but just with sunflowers. 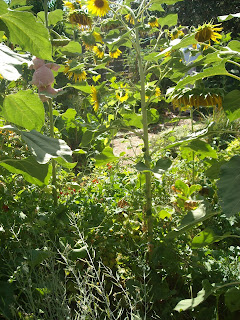 Corn requires a dense planting of a good dozen or more plants for the cobs to pollinate. They will end up consuming a fair amount of space if you are wanting corn cobs along with the shade. I did find my pumpkins grew fine in these cramped conditions, and probably any vine type of plant, like beans or cucumber would. So this is why this year I stuck to just sunflowers, just 4 or so in each bed is proving to be adequate.

I did find some references to sunflowers being allelopathic, meaning poisonous to surrounding plants. However like with so many topics, I found many people claiming this to not be the case. From the experiences of my last and current summer I have seen no detrimental evidence of this. So far I have successfully grown: pumpkin, beans, cucumber, tomato, lettuce, silverbeet, spring onion, broccoli, melon, eggplant, and more. There may be a slight undetectable impact, I don’t know. The pumpkins may have grown one or two more fruit if not planted beneath, but that would be impossible to know. What I do know... is that the pumpkins are at risk of being dead without the sunflowers. The pumpkins and other plants have by far benefited from their shade more than any negative allelopathic effect has had.

If you look closely in the first photo there are beans enjoying the sunflowers, using them as a climbing gym. 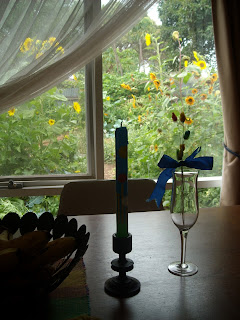 Atop of protecting our plants from the brutal summer sun... they make the garden look just beautiful!
Posted by Jason Dingley at 8:00 PM