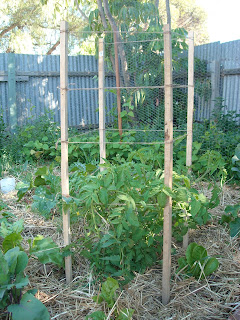 There seems to be two popular methods for staking tomatoes, the single stake method, and the cage method. But which should I use?

Last summer you might remember my poor effort at staking tomatoes. I also experimented with no stake. I was curious on how the plant would behave, and had high hopes that I would discover it to be unnecessary. What I learnt, is that the plant first attempts to grow up then seems to collapse under its own weight, especially when ladened with fruit. This caused some of the limbs to snap, and took up allot of room. The biggest issue was that it made harvesting difficult as the fruit was often hiding deep in the bed under the foliage of everything else that was growing in there. This however did highlight one very big benefit... the fruit were protected from the hot summer sun. 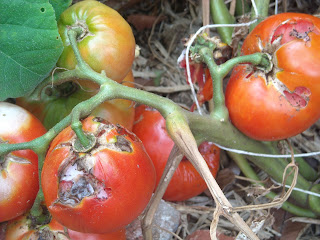 Above is an example of tomatoes that were left exposed to direct summer sun. As you can see they developed a very nasty sunburn, and then once weakened the bugs attack. So this summer I wanted the simplest staking method that made harvesting easy, but also facilitated shade for the fruit.

The single stake method with it’s apparent simplicity initially caught my attention. The method involves using a very tall single stake and training the plant to grow vertically. When watching a YouTube video on this it however became very evident why this was not going to be best option, when the gardener said “You do this so the fruit can get as much sun as possible”. Looking at the grey sky in the background I realised that this method was probably devised in a cooler climate, definitely not South Australia. The single stake method may however work if you are growing a number of plants together, so that they shade each other. 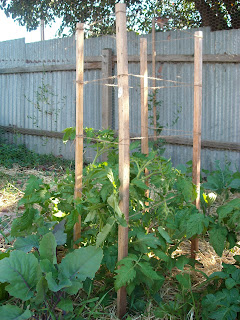 Next I looked at the cage method. It involves creating a simple cage around the plant that assists it to grow vertically, but with some width. The fruit is then protected by some surrounding foliage, but should still be easy to harvest. Sounded perfect, so that’s just what I did.

I made my cages using 4 x 1.5 meter wooden stakes, spaced about 40cm apart, with 4 pieces of twine wrapped around. A tip for wrapping the twine around is to do the top one first and work down. This will minimise the tightening of each string from loosening the previous ones. It’s a leverage thing. As the plant grows I suspect its limbs will need to be encourage back inside the cage, which doesn't sound too hard nor time consuming, particularly as I am hoping no additional tying will be required. 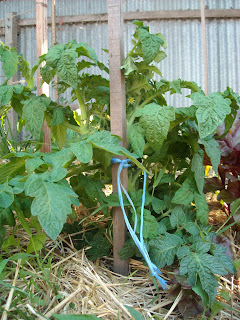 I did use a single stake on this bush variety however. It shouldn't get too large, and with a stem and limbs like that of an olympic weightlifter, I am sure it can hold its own.

What method have you used?
Posted by Jason Dingley at 12:30 PM