To dig or not to dig

That is the question? 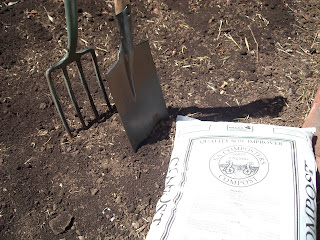 When I first started on this wonderful rollercoaster journey called gardening, Melanie and I attended an organic gardening course. One of the concepts that really stood out at the time was the idea that digging was something a gardener should seldom do. Not only is it time consuming and back breaking, but it was said by our teacher, to be not that good for the soil either.

The understanding I walked away with is that soil is living creature, and just like an animal that walks around on it’s surface, is comprised of a complex system of parts, including a digestive system. In the wild food such as fruit and leaves fall the ground. There they are broken down by bacteria and surface dwelling bugs. Even though broken down, this organic material is still not digestible by plants. The mental image that comes to mind, is of the food just being chewed. From here it travels down through the soil, just like a digestive system, slowly broken down bit by bit by various organism that live at different depths within the soil.

Soil has been feeding plants for millions of years, before humans were even a twinkle in mother natures eye, and never required being turned by a spade. All the microscopic organisms have become accustomed to their place in the system and if turned become displaced. The organisms that live nearer the surface for example can not or should not live deeper down, and vise versa. Mixing material in at the wrong level is sure to only result in a stomach ache, loud belches, and smelly farts.

Actually I am not quite kidding there. Our teacher also went on to explain that it can cause the soil to become toxic, and result in unhealthy poorer performing plants.

What was recommended instead of digging and turning was to simply keep adding organic material to the soil surface and allow the soil to digest it naturally. Even if the soil is in very bad condition, it was recommended to just keep pouring on the goodness, and eventually that soil will come back to life. 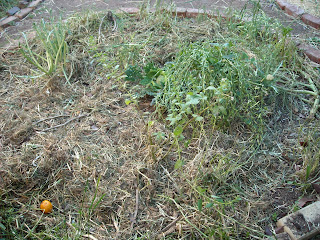 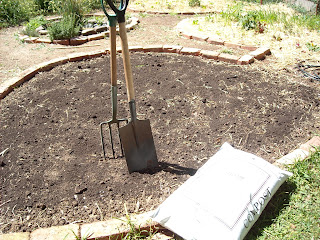 After Ginger and Diggie (chickens) did a hopeless job at clearing and preparing this bed, I had to. The soil had obviously become quite depleted of organic matter and had become compacted. This made a very difficult job of pulling the weeds and grass. I used a fork to loosen the soil but was careful to not turn. Once cleared I poured on some good quality compost, from SA Composters, and again did not turn it in, just left in on the surface.

Then again... is compost a material that is already broken down far enough, and is thus suitable for turning in? But even if it is, is there any benefit in turning it in? What's your thoughts on the topic?

Posted by Jason Dingley at 9:32 PM