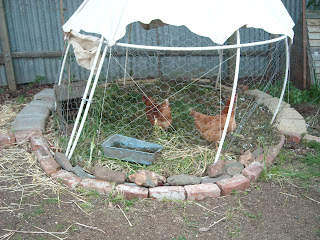 Our two brave girls spent last night in the chicken tractor (dome) after some fox proofing modifications. They seemed quite reluctant making it quite clear they wanted to be put in hen house for the night. I attempted to reassure them that my plan was foolproof, but they weren't having a bar of it. I think my reputation has come to precede me. 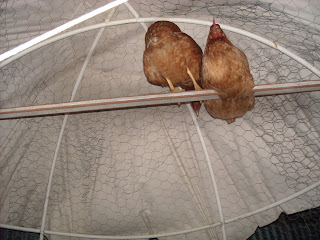 The modifications I made was to first remove the difficult to access and cramped sleeping quarters, and replace it with a good quality single roosting post, up as high as possible while still giving plenty of headroom for four chickens. This change was made based a comment made by Jo Smith indicating her chooks have survived with this design. Possibly it’s the fact that it is quick and easy for the chickens to fly on and off, and having nothing for the fox to grip onto, that makes it work. This might be another case of simple is best. 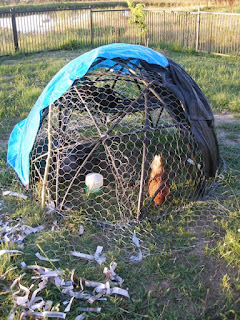 The second modification was inspired by a suggestion made by Michelle. Above is picture of her dome, isn’t it cute? Really goes to show  how small you can make these domes. Now in this dome safety by hight is clearly not going to work. Michelle’s solution was to build a wire skirt around the dome that runs outwards over the ground, making digging under a considerable effort. 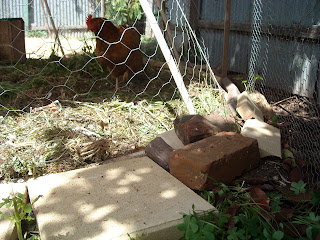 Because we have a brick border and a path surrounding the front of the dome, and a fence that crosses the back, Michelle’s idea wasn’t going to be quite as easy using wire as it couldn’t go all around. For the past months, while this fox nightmare has been occurring, I have been barricading the hen house with paving stones and rocks. So it occurred to me I could achieve the similar function as Michelle’s design except with paving stones.

Thankfully, touch wood, the girls survived the night. Last time it took 5 days though.
Posted by Jason Dingley at 9:17 PM