Even from an early age I knew foxes to be cunning, clever and tricky. Many of the children's stories that I was raised on depicted foxes in this way. Even in Asian folklore the fox symbolises a powerful spirit that is smart, cunning and mischievous. The act of beating one's opponent in a competition of wits is known as "to outfox". But not until I have been up against a fox have I understood what a serious adversary the fox truly is.

So as you may know my first encounter was when two of our chickens were taken through the open coop door, requiring very little wit on the foxes part, and allot of stupidity on mine. Next one more was taken, removed from the dome via the roof. The dome did not have wire covering the very top, but the umbrella cover was meant to block that opening. The clever fox however climbed up the side of the dome, under the umbrella, and probably just plucked out one of the girls while she sat ever so still high on the perch. 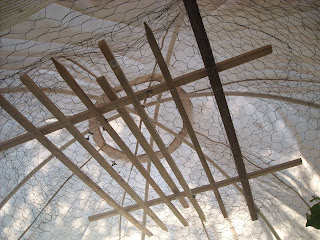 I fixed the hole in the ceiling with more wire mesh but still knew there was the potential for the foxes to gain access by burrowing  under. With a moveable dome I couldn't think of any possible way to prevent this, so instead I worked on creating a secured roosting area high off the ground. About 1.5 meters off the ground I made an enclosed area out of wooden stakes and wire mesh. The only entrance into this roosting area was a small hole on either side. The chickens even found it a challenge to get in, requiring them to fly almost vertically. After watching them struggle I was pretty confident a fox would not be able to make the vertical jump through a small opening with only some thin wood and wire to grab onto. 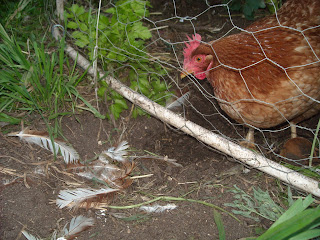 But I was wrong! Outfoxed again.

What was also surprising is how little the fox had to dig to get under. Oh the shame, not only as an example of my mental powers, but of showing my face at the fodder store. In the meantime, while I plan my next cunning move, the chickens are being carried like royalty to and from the coop and dome at dawn and dusk. With just two chickens that’s not too much of a chore.

So have I developed a hatred towards foxes? No, surprisingly I have found myself developing quite an interest in them, along with a deep respect for their skills. I was pleased to discover my feeling towards foxes are shared even in Britain, one of their native homes. According to a recent survey 92% of respondents admitted having a fondness for them. Unfortunately for the native Australian wildlife they were found inhabiting Melbourne in the 1930s and had become widespread throughout Australian cities by the 1970s. But not at the fault of the fox who all this time, including the times it has been taking my chickens, has just been doing what we all fight to do... survive. As the caretaker of chickens I have just got to get smarter.

A discovery I found quite interesting on my internet travels, was that the fox have been successfully integrated into agriculture as a way of naturally controlling pests on fruit farms.
Posted by Jason Dingley at 2:00 PM