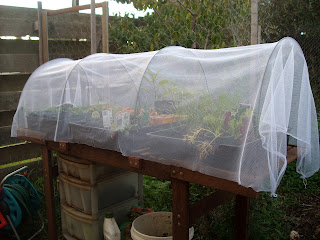 After feeling set back by the those pesky sparrows eating our seedling for the last time, I set about building a cover for the seedling table. My first thought was some kind of wooden frame over it covered in netting, but that sounded like too much work. Then I had the idea to use plastic pipe arched over the top of table and screwed into the sides. Just when I thought the idea couldn't get any easier, it dawned on me to just use thick metal wire pushed into a couple of holes on either side.

I initially tried sourcing the wire from old coat hangers, alas they were too short. I was about to go the to hardware store to buy some when I remember seeing an old broken and disused fence on some public land just down the road. “Come on kids lets go for a bike ride” I said, wire cutters in hand. It did however take a bit of work convincing the children that taking something that is clearly abandoned is not technically stealing. 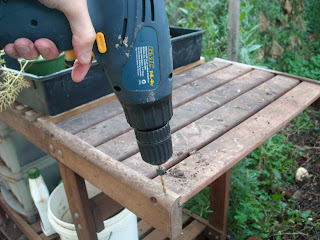 I drilled a set of vertical holes along the sides of the table top, arched the wire over and simply pushed the ends down into the holes. Easy! this was going to be done in a matter of minutes. Then I went to drill the holes for the middle arches and discovered the table top in the middle is narrower than the seedling trays, so I had to screw a couple of wooden blocks to the side. Still easy, but I felt the design lost a little of its minimalist charm.

Next came the netting cover. I was going to use curtain netting but it all seemed too thick and heavy. I was nervous it might blockout too much light. Instead I purchased 1 meter of mosquito netting from Spotlight for only $4.50. Luckily the store assistant cut me 1.3 meters, exactly the amount I ended up needing. I can’t tell you how relieved I was. My tip of the day: Measure things, don’t guess. 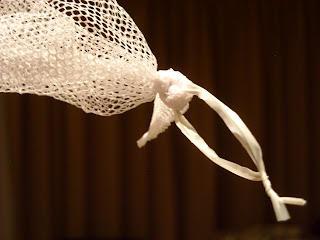 To hold the cover in place I tied rings to the two back corners of the netting, made from bread bag ties. A couple of hooks on the table hold these rings in place. 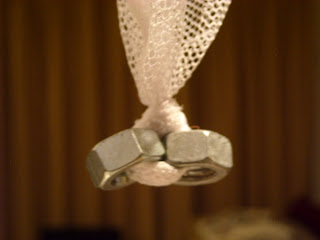 Gaining access to the seedlings without any fuss was a top criteria, and I successfully achieved this by giving the netting a pair of nuts. Two pairs in fact (feeling a bit jealous), a set on each front corner. The weight of the nuts turned out to be quite sufficient to hold the netting tight, yet light enough to lift the netting out the way when needed.

Take that! you pesky sparrows.
Posted by Jason Dingley at 11:50 AM