And the sack race winner is... 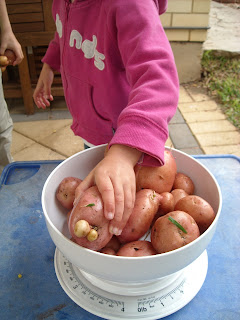 My 4 year old daughter. Back in October we held a family sack race, not of the athletic kind, rather a challenge to see who could grow the most potatoes in a sack, and last week we determined the winner. My daughter won with 1200g, my son following closely with 900g, me taking third place with 600g, and Melanie coming last with a woeful 200g. That’s not much more than the seed potato itself.

Overall not a very good result but I don’t think the technique was at fault. Firstly we used spuds from the organic store as seed potatoes instead of true certified ones. Secondly none of us topped up the soil in the sacks, so the plants only had so much room with which to grow their clone armies. Partly this was due to slackness by the gardeners, but mostly due to not knowing where to source the soil. Nowhere in the garden was there a place I felt I could have dug a hole. I will have to solve this dilemma before next spring though.

Thirdly the bags were heavily exposed to the summer sun, resulting I am sure in allot of moisture loss. Which does explain the winning order. Melanies sack was in the most exposed position, mine less so as it had a bit of afternoon shade, and the childrens bags were both protected by the Melanies and mine. Next race I know where I am going to be sticking my sack, he he he. 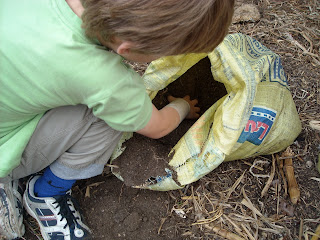 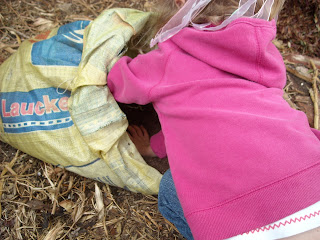 For those of you trying to motivate your children to participate in the garden I highly recommend giving a sack race a go. Earlier that day my son refused to join me in the garden, my daughter did but she complained the whole time about dirty hands. But once I announced it was time to determine the winner of the sack race they were both into it like a flash, dirty hands and all. Sadly Children seem such competitive little buggers, but if it gets them gardening why not use it.

Next spring I will be inviting your children to also join us in this race. Who would be interested in joining a national organised event?
Posted by Jason Dingley at 7:54 PM