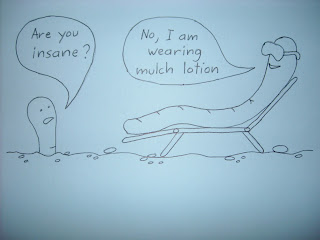 For a long time I have known the importance of mulch in regards to helping the soil maintain moisture. More recently I have learnt its purpose is more broader than that.

One of the functions of mulch is to provide UV protection to those wonderful creatures the earthworms. Now if you think we have to be careful of going out in the sun, well it is nothing compared to how careful worms have to be. According to some research I found, earthworms that crawl out of the soil just a few hours after sunrise can die of extreme sunburn. Worms breath through their skin so it would be like a bad case of sun burnt lips. With the risk of death at just a glimpse of the sun is it any wonder they keep well away from the soil surface. It’s just too dam risky. This of course means the wonderful work of fertilising and aerating is not happening near the soil surface during daylight hours. Unless of course you provide them with a sun shield, a nice layer of mulch.

Another point the research makes is that worms need to breath air and during rain they must surface if they don’t want to drown. The problem here is while avoiding one form of death they are risking another. Apparently, which is why you find dead earthworms after a heavy rain, they didn’t drown they burnt. My though here is that mulch would save them in this situation.

I have also learnt that bare soil with its constant exposure to direct sun light and the air results in damage to its rich chemical structure, harms the living organisms (not just the worms), and I believe causes nutrients to oxidize and be lost. No wonder there is so much wah hoo over mulch. 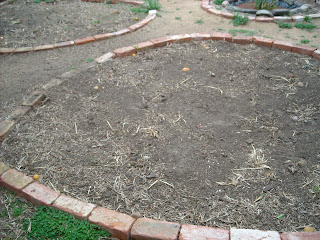 After the chickens had done a fantastic job of preparing the soil in these beds I unfortunately left them bare. In just a month of exposure I could see and feel the drop in quality. A nice spongy soil had quickly become gritty like sand. Sigh! 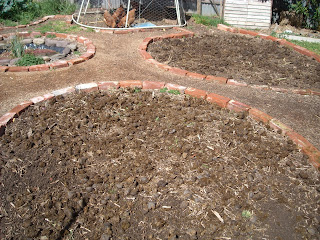 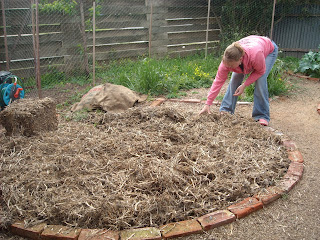 This and last weekend saw us add a layer of horse manure and pea straw. So hopefully the soil will regain some of its vigor in time for the eager seedlings.

Even though there are many benefits to mulching I have found it does require a change in the way I garden. In the past for simplicity reasons I liked to just direct sow. However I find with a layer of mulch this becomes difficult if not impossible. I have tried creating a trench in the mulch filled with soil however the birds quickly wreck that. Have also tried covering the soil with a hessian sack with no success. So even though raising seedlings is an additional step it seems to be the best approach, for us at least.

What value do you put on mulch?

Side note: Even though I found the research on earthworms interesting I disagree with harming living creatures for knowledge.
Posted by Jason Dingley at 8:56 PM