Now it may not be as effective as a border patrolled by chickens but here is another simple effective grass barrier. Following on from Keeping the grass out.. I still had about 15% of the vegetable garden perimeter vulnerable to grass attack.

On my first post on the topic, reader Yollie left a comment mentioning she had heard of a plastic barrier used by councils that is fitted upright under the surface to stop the roots from running. So I went to the hardware store in search of such a material. Instead I found nothing but strange looks. While sitting outside in the car park about to leave eating a sausage sizzle, without any sausage but with a double helping of onion, that are often available outside hardware stores, I thought “they must have something similar”. So blown by the winds of determination I proceeded back inside. Again I was approached by an enthusiastic assistant and reluctantly I again described what I was looking for. But instead of the expected “Never heard of it” I got “Why not use this...” 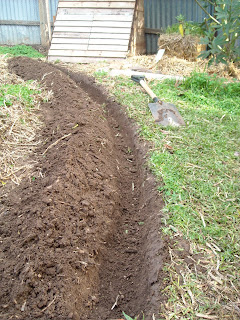 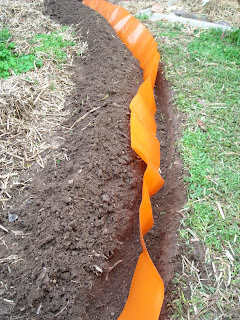 Step 2 – cut a strip of builders plastic sheeting and stand it vertically in the trench. This bit of plastic cost me less than a dollar. 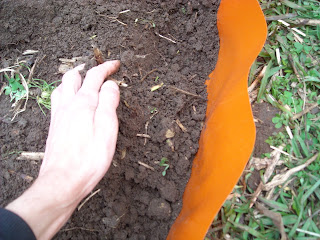 Step3 – push the dirt back in behind the plastic. 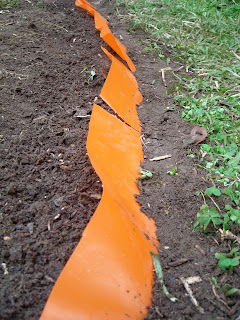 Step4 – fold the bit sticking out of the ground back. If like me you have a curve, cut some slits to help it fold back. 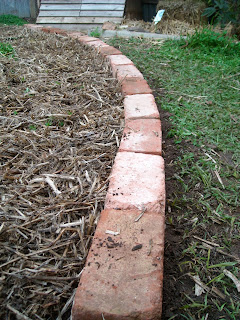 Step5 – cover with bricks. Sourced from a demolitioner, 30c each.
And presto! One grass barrier.  How do I know this works? I tried it out about 10 weeks ago on a smaller section. The grass has gone wild on one side but not a single blade on the other (touch wood).

Thanks Yollie, and thanks stranger at the hardware store.
Posted by Jason Dingley at 8:00 PM