How not to solarize lawn 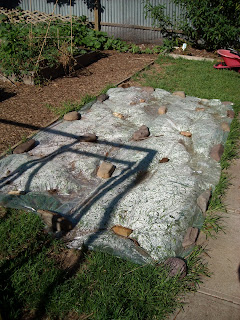 Back when I was preparing the area for the current mandala garden I had an area of lawn that I needed to kill off. Now it was summer, granted a mild one, and the grass was starting to feel the heat. I had once heard from a friend that you can kill grass by burning it using a technique called solarizing. The technique involves covering the law with a sheet of black plastic. The theory being that the black absorbs the heat from the summer sun, scorching the grass beneath. Well that is how it should work if you do it properly.

I however didn't have any black plastic but I had plenty of clear stuff. My logic, yes there was some, was that the clear plastic would not get overly hot itself but surly it would hold in the heat raising the temperature higher enough to have a similar effect. A few weeks latter when I lifted the plastic this is what I revealed... 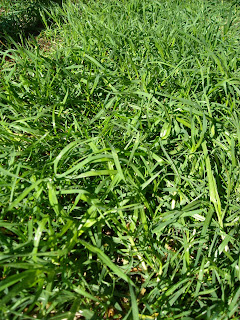 Well as you can clearly see this is not how you solarize a law. But it does appear to make an excellent and cheap glass house for your grass. The grass has absolutely loved it and has flourished, even without watering. So if you have a area of lawn that could do with a bit of a boost why not try this.

Has anyone tried either the black or clear plastic solarization technique?
Posted by Jason Dingley at 8:00 PM