A few years ago Melanie and I went on a beautiful walk in the Adelaide botanical gardens. Many of the paths are a stunning lite colour and nice and soft underfoot, sponge like. Ever since Melanie has had her heart set on having the same paths at home. So with the previous incarnation of our garden I attempted to source such a material. When I returned home with finely chopped brown bark chips she was gravely disappointed. None of the local garden stores had anything like what we had seen.
With my relationship on the line I pursued to source this magical material with great vigor. Returning to the botanical gardens I bailed up one of resident gardeners for questioning. He informed me that the paths are made form saw dust. He was however not forth coming with his supplier. But after many phone calls and following leads I eventually got my man. And his name was Pete, Pete's Soils.
Pete doesn't typical deal with the general public so one cubic meter was the minimum purchase, three times more than I needed. But priced at around $30, who can complain. I had no idea of what one cubic meter would look like so it was extremely entertaining when a truck the size of my house rolled up. Its scoop was so large it was like watching someone filling a thimble with a bucket (with no spout).
Even more amusing, though extremely embarrassing at the time, was when the mountainous trailer load and I set off down the road towards home. I so wish I had had the camera. If it hasn't hit you yet to what had happened let me give you a clue, saw dust is extremely lite. Oh Yes! I was like Hansel and Gretel leaving a trail of bread crumbs. Except I was leaving a trail that could have been seen from the International space station.
The up side of this story is that I end up with an amount closer to that of what I actually needed, it looks and feels great, and my relationship is saved. 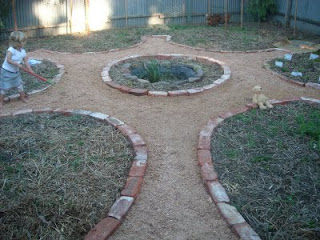 A Zen master at work. 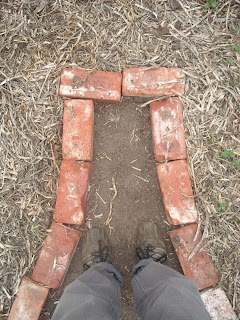 The ends of the paths were a bit too small. Widened so one can easily kneel down. 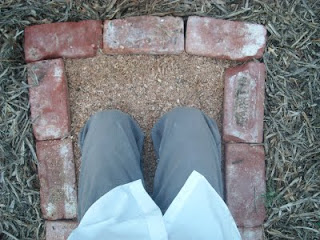 The saw dust feels wonderful to kneel on. 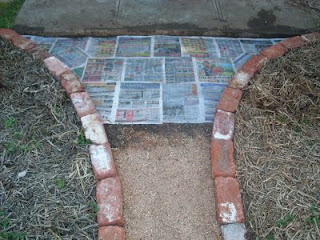 Where the garden path joins the concrete path I dug it out below the concrete to keep the saw dust boxed in. The path is completely lined with 6 layers of newspaper to stop grass and weeds.
I highly recommend saw dust as a garden path material and even though the saw dust is extremely fine I have been informed it should last close to year. Apparently this is due to a high carbon to nitrogen ratio. You can read more about carbon-nitrogen relationship here.
What do other people use for paths?
Posted by Jason Dingley at 2:26 PM

Email ThisBlogThis!Share to TwitterShare to FacebookShare to Pinterest
Labels: infastructure