Where do you skinny dip?

Following Linda Woodrow's design a pond is placed in the centre of the mandala garden to add a vital cog in the system... water. The theory behind the pond is it provides insect predators such as frogs and lizards a place to live and drink. Like using chickens for grass control, in my previous post, why do the hard work of pest removal yourself when you can get someone else to do it for you. And lets be honest our tongs don't move nearly as quick as a frogs. 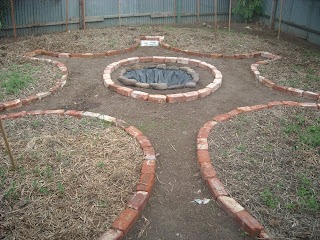 Building the pond proved more challenging than I anticipated. The first challenge was getting it in the centre. Which I didn't achieve perfectly, but close enough. In order to dig the hole I had to pull the centre stake out. With no central reference I just started digging. In hindsight before pulling the stake I should have marked out the perimeter. Don't you just love and hate hindsight.

It was recommended to me by a few people to make it as big and deep as possible to increase self sustainability. Which I did within the limited space. 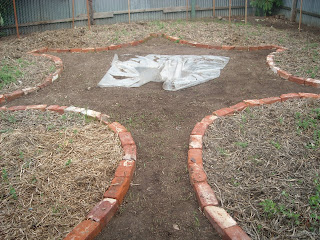 For the lining I initially I purchased clear builders plastic sheeting thinking it would let through the colour of the soil and look more natural. But I now know why everyone uses black. Clear when in the bright sun turns white and stands out like a spot light. So back I went to the hardware store. The silver lining of this cloud/pond is that I now have a double layer, which I would recommend. 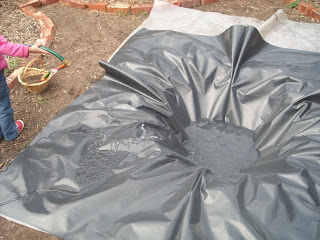 On the first attempt of laying the plastic in the hole the kids helped by jumping in it. With the second attempt I simply laid it flat across the hole and put the hose on it. The weight of the water did the job and a lot more gently I might add. 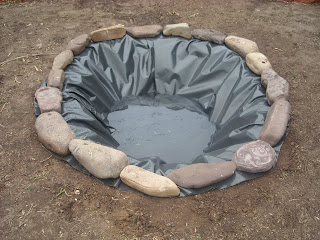 We then placed rocks around the edge and I cut off the excess plastic. Wrecking a perfectly good pair of scissors in the process. 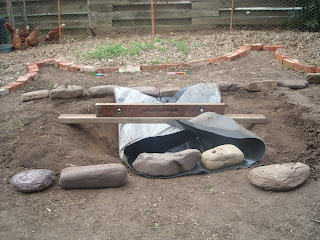 Standing back admiring my work I realised the water wasn't level. The garden is set on a slight slope and thus so was the pond and from the viewing side one could see a large amount of exposed plastic. So I attempted to get the water level with the pond edge. I tried a number techniques, including poring more water in at one end, to no avail. So I levelled the pond edge instead. 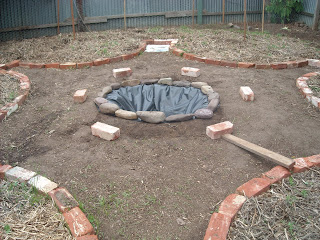 One thing I got right first hit was laying the brick border. I devised a simple technique to get it circular and keep the path width even all the way round. Using a measuring stick I laid six reference brinks first. 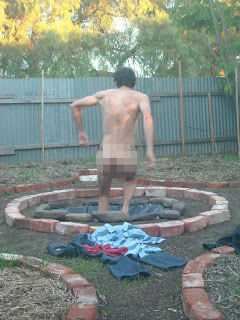 When complete the kids took off their clothes and went for a skinny dip in it. Being partial to one myself I later took a dip.

But now what? I am unsure on how to vegetate the pond particularly as it has a plastic bottom. Do I need a pump to keep it from going yuck? I am also nervous that the little critters when getting a drink will slip in on the plastic edge. Love to hear your suggestions.
Posted by Jason Dingley at 9:45 PM

Email ThisBlogThis!Share to TwitterShare to FacebookShare to Pinterest
Labels: pond