Keeping the grass out

I love the feeling of soft grass between my toes of a nice manicured lawn but man I find it annoying when it comes to vegetable gardening. Keeping it out is a constant and tiring battle. It invades by air, trojan horse, and by sneaking over or under the border. With our new mandala garden we now have a giant circle to protect. To the east there is a strong and established army, and on all other sides small rebel forces establish daily.
So how were we going to secure this border?

My first though was to erect a barricade. In my experience however, infiltration is still possible and would require constant whipper snipping that would, not only involve a job I would rather not do, it would in fact aid the enemy by throwing it's seeds over the line.

Linda Woodrow in her book "The Permaculture Home Garden" recommends a border of sugarcane, lemon grass, housetail, and comfrey. I like this organic approach but it would still require whipper snipping if I didn't want a grass jungle surrounding the patch.

Chemical warfare is not an option. Not only is it against the Geneva convention but on the occasion when I have used it I don't sleep easy. 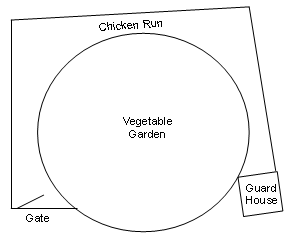 So what did we do? We negotiated a trade deal with a super power... the Chooks. Who have willing agreed to be our century guards if they get to eat the enemy. A chicken wire fence has been erected around 2/3 of the perimeter that the guards patrol daily. 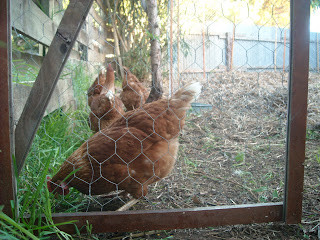 Field intelligence photos reveals the enemy has taken many casualties and has retreated its troops to a safe distance from the "no grow zone".

On a serious note, I am learning however to not consider any of natures beings or forces as an enemy, rather an opportunity to learn more about the powerful balancing mechanisms of nature. I have made piece with the grass and appreciate the nutrition and happiness they bring our chickens.

Anyone got any other grass management techniques?
Posted by Jason Dingley at 1:55 PM